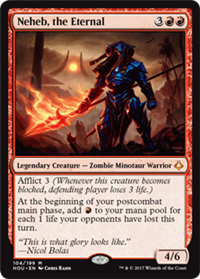 At the beginning of your postcombat main phase, add R for each 1 life your opponents have lost this turn.