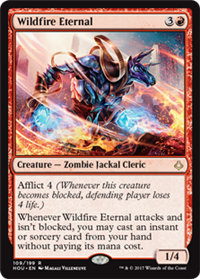 Whenever Wildfire Eternal attacks and isn't blocked, you may cast an instant or sorcery card from your hand without paying its mana cost.

7/14/2017 An ability that triggers when something “attacks and isn’t blocked” triggers in the declare blockers step after blockers are declared if (1) that creature is attacking and (2) no creatures are declared to block it. It will trigger even if that creature was put onto the battlefield attacking rather than having been declared as an attacker in the declare attackers step.
7/14/2017 Wildfire Eternal’s second ability resolves before combat damage is dealt, and you must cast a spell at that time if you wish to cast one without paying its mana cost. You can cast a sorcery during the declare blockers step this way.
7/14/2017 If you cast a card “without paying its mana cost,” you can’t pay any alternative costs. You can, however, pay additional costs. If the card has any mandatory additional costs, such as that of Tormenting Voice, those must be paid to cast the card.
7/14/2017 If the card has in its mana cost, you must choose 0 as the value of X when casting it without paying its mana cost.
7/14/2017 If multiple creatures block a creature with afflict, afflict triggers only once.
7/14/2017 Afflict causes the defending player to lose life; it’s not damage or combat damage.
7/14/2017 If a creature is attacking a planeswalker, that planeswalker’s controller is the defending player.
7/14/2017 Afflict resolves before combat damage is dealt. If this loss of life brings a player to 0 life or less, that player loses the game immediately. A blocking creature with lifelink won’t deal combat damage in time to save that player.
Posts Quoted:
Reply
Clear All Quotes
Back to Top