Sign In Register
2019 Holiday Exchange!
A New and Exciting Beginning
The End of an Era
Avg Price $0.75
Buy on TCGPlayer
​ 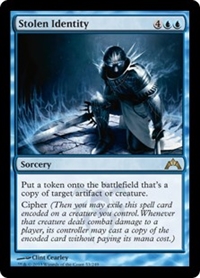 Create a token that's a copy of target artifact or creature.

Cipher (Then you may exile this spell card encoded on a creature you control. Whenever that creature deals combat damage to a player, its controller may cast a copy of the encoded card without paying its mana cost.)

1/24/2013 If the token you create is a copy of a creature, you can exile Stolen Identity encoded on that token.
1/24/2013 The token copies exactly what was printed on the original artifact or creature and nothing else (unless that permanent is copying something else or is a token; see below). It doesn’t copy whether it is tapped or untapped, whether it has any counters on it or Auras and Equipment attached to it, or any non-copy effects that have changed its power, toughness, types, color, or so on.
1/24/2013 If the copied permanent has in its mana cost, X is considered to be zero.
1/24/2013 If the copied permanent is copying something else (for example, if the copied creature is a Clone), then the token enters the battlefield as whatever that creature copied.
1/24/2013 If the copied permanent is a token, the token that’s created copies the original characteristics of that token as stated by the effect that put the token onto the battlefield.
1/24/2013 Any enters-the-battlefield abilities of the copied permanent will trigger when the token enters the battlefield. Any “as [this permanent] enters the battlefield” or “[this permanent] enters the battlefield with” abilities of the chosen permanent will also work.
4/15/2013 The spell with cipher is encoded on the creature as part of that spell’s resolution, just after the spell’s other effects. That card goes directly from the stack to exile. It never goes to the graveyard.
4/15/2013 You choose the creature as the spell resolves. The cipher ability doesn’t target that creature, although the spell with cipher may target that creature (or a different creature) because of its other abilities.
4/15/2013 If the spell with cipher doesn’t resolve, none of its effects will happen, including cipher. The card will go to its owner’s graveyard and won’t be encoded on a creature.
4/15/2013 If the creature leaves the battlefield, the exiled card will no longer be encoded on any creature. It will stay exiled.
4/15/2013 If you want to encode the card with cipher onto a noncreature permanent such as a Keyrune that can turn into a creature, that permanent has to be a creature before the spell with cipher starts resolving. You can choose only a creature to encode the card onto.
4/15/2013 The copy of the card with cipher is created in and cast from exile.
4/15/2013 You cast the copy of the card with cipher during the resolution of the triggered ability. Ignore timing restrictions based on the card’s type.
4/15/2013 If you choose not to cast the copy, or you can’t cast it (perhaps because there are no legal targets available), the copy will cease to exist the next time state-based actions are performed. You won’t get a chance to cast the copy at a later time.
4/15/2013 The exiled card with cipher grants a triggered ability to the creature it’s encoded on. If that creature loses that ability and subsequently deals combat damage to a player, the triggered ability won’t trigger. However, the exiled card will continue to be encoded on that creature.
4/15/2013 If another player gains control of the creature, that player will control the triggered ability. That player will create a copy of the encoded card and may cast it.
4/15/2013 If a creature with an encoded card deals combat damage to more than one player simultaneously (perhaps because some of the combat damage was redirected), the triggered ability will trigger once for each player it deals combat damage to. Each ability will create a copy of the exiled card and allow you to cast it.
Posts Quoted:
Reply
Clear All Quotes
Back to Top