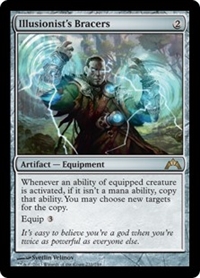 Whenever an ability of equipped creature is activated, if it isn't a mana ability, copy that ability. You may choose new targets for the copy.

1/24/2013 An activated ability is written in the form “Cost: Effect.”
1/24/2013 The copy will have the same targets as the ability it’s copying unless you choose new ones. You may change any number of the targets, including all of them or none of them. If, for one of the targets, you can’t choose a new legal target, then it remains unchanged (even if the current target is illegal).
1/24/2013 If the ability is modal (that is, it says “Choose one —” or the like), the copy will have the same mode. You can’t choose a different one.
1/24/2013 If the ability has in its cost, the value of X is copied.
1/24/2013 If the cost of an activated ability requires Illusionist’s Bracers or the equipped creature to be sacrificed, the ability won’t be copied. At the time the ability is considered activated (after all costs are paid), Illusionist’s Bracers is no longer equipped to that creature.
1/24/2013 If Illusionist’s Bracers somehow becomes equipped to a creature an opponent controls, and an activated ability (that isn’t a mana ability) of that creature is activated, you will control the copy of that ability.
4/15/2013 A mana ability is an ability that (1) isn’t a loyalty ability, (2) doesn’t target, and (3) could put mana into a player’s mana pool when it resolves.
Posts Quoted:
Reply
Clear All Quotes
Back to Top