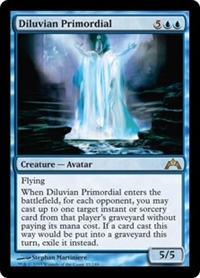 When Diluvian Primordial enters the battlefield, for each opponent, you may cast up to one target instant or sorcery card from that player's graveyard without paying its mana cost. If a card cast this way would be put into a graveyard this turn, exile it instead.