Sign In Register
2019 Holiday Exchange!
A New and Exciting Beginning
The End of an Era
Avg Price $0.93
Buy on TCGPlayer
​ 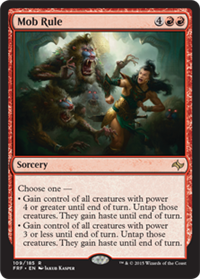 11/24/2014 You choose which mode you’re using as you cast Mob Rule. Once it’s cast, you can’t change its mode, even if creatures’ powers change in response.
11/24/2014 Once you gain control of a creature, it doesn’t matter what happens to its power.
11/24/2014 Mob Rule can affect creatures you already control or ones that are already untapped. It will untap them if applicable and give them haste.
11/24/2014 Gaining control of a creature doesn’t cause you to gain control of any Auras or Equipment attached to it.
Posts Quoted:
Reply
Clear All Quotes
Back to Top