Sign In Register
2019 Holiday Exchange!
A New and Exciting Beginning
The End of an Era
Avg Price $0.29
Buy on TCGPlayer
​ 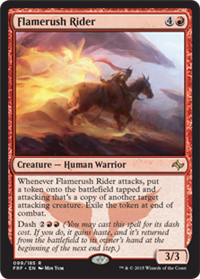 Whenever Flamerush Rider attacks, create a token that's a copy of another target attacking creature and that's tapped and attacking. Exile the token at end of combat.

Dash 2RR (You may cast this spell for its dash cost. If you do, it gains haste, and it's returned from the battlefield to its owner's hand at the beginning of the next end step.)