Sign In Register
2019 Holiday Exchange!
A New and Exciting Beginning
The End of an Era
Avg Price $1.04
Buy on TCGPlayer
​ 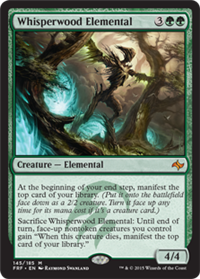 At the beginning of your end step, manifest the top card of your library. (Put it onto the battlefield face down as a 2/2 creature. Turn it face up any time for its mana cost if it's a creature card.)

Sacrifice Whisperwood Elemental: Until end of turn, face-up nontoken creatures you control gain "When this creature dies, manifest the top card of your library."

11/24/2014 The last ability grants that ability to face-up nontoken creatures you control as that ability resolves. Creatures that come under your control later in the turn won’t have that ability.
11/24/2014 The face-down permanent is a 2/2 creature with no name, mana cost, creature types, or abilities. It’s colorless and has a converted mana cost of 0. Other effects that apply to the permanent can still grant or change any of these characteristics.
11/24/2014 Any time you have priority, you may turn a manifested creature face up by revealing that it’s a creature card (ignoring any copy effects or type-changing effects that might be applying to it) and paying its mana cost. This is a special action. It doesn’t use the stack and can’t be responded to.
11/24/2014 If a manifested creature would have morph if it were face up, you may also turn it face up by paying its morph cost.
11/24/2014 Unlike a face-down creature that was cast using the morph ability, a manifested creature may still be turned face up after it loses its abilities if it’s a creature card.
11/24/2014 Because the permanent is on the battlefield both before and after it’s turned face up, turning a permanent face up doesn’t cause any enters-the-battlefield abilities to trigger.
11/24/2014 Because face-down creatures don’t have names, they can’t have the same name as any other creature, even another face-down creature.
11/24/2014 A permanent that turns face up or face down changes characteristics but is otherwise the same permanent. Spells and abilities that were targeting that permanent, as well as Auras and Equipment that were attached to the permanent, aren’t affected.
11/24/2014 Turning a permanent face up or face down doesn’t change whether that permanent is tapped or untapped.
11/24/2014 At any time, you can look at a face-down permanent you control. You can’t look at face-down permanents you don’t control unless an effect allows you to or instructs you to.
11/24/2014 If a face-down permanent you control leaves the battlefield, you must reveal it. You must also reveal all face-down spells and permanents you control if you leave the game or if the game ends.
11/24/2014 You must ensure that your face-down spells and permanents can easily be differentiated from each other. You’re not allowed to mix up the cards that represent them on the battlefield in order to confuse other players. The order they entered the battlefield should remain clear. Common methods for indicating this include using markers or dice, or simply placing them in order on the battlefield. You must also track how each became face down (manifested, cast face down using the morph ability, and so on).
11/24/2014 There are no cards in the Fate Reforged set that would turn a face-down instant or sorcery card on the battlefield face up, but some older cards can try to do this. If something tries to turn a face-down instant or sorcery card on the battlefield face up, reveal that card to show all players it’s an instant or sorcery card. The permanent remains on the battlefield face down. Abilities that trigger when a permanent turns face up won’t trigger, because even though you revealed the card, it never turned face up.
11/24/2014 Some older Magic sets feature double-faced cards, which have a Magic card face on each side rather than a Magic card face on one side and a Magic card back on the other. The rules for double-faced cards are changing slightly to account for the possibility that they are manifested. If a double-faced card is manifested, it will be put onto the battlefield face down. While face down, it can’t transform. If the front face of the card is a creature card, you can turn it face up by paying its mana cost. If you do, its front face will be up. A double-faced permanent on the battlefield still can’t be turned face down.
Posts Quoted:
Reply
Clear All Quotes
Back to Top