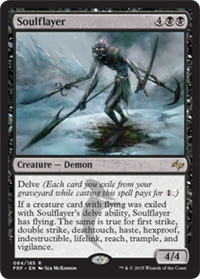 Delve (Each card you exile from your graveyard while casting this spell pays for 1.)

If a creature card with flying was exiled with Soulflayer's delve ability, Soulflayer has flying. The same is true for first strike, double strike, deathtouch, haste, hexproof, indestructible, lifelink, reach, trample, and vigilance.

11/24/2014 Creature cards that have abilities that grant the listed keyword abilities to themselves won’t count. For example, exiling a Battle Brawler (a creature with “As long as you control a red or white permanent, Battle Brawler gets +1/+0 and has first strike”) with Soulflayer’s delve ability won’t cause Soulflayer to have first strike, even if you control a red or white permanent.
11/24/2014 You can’t exile more cards from your graveyard than you’d need to pay Soulflayer’s generic mana requirement. In most situations, this means you can’t exile more than four cards, even if you want to exile more to give it extra abilities.
11/24/2014 You exile cards from your graveyard at the same time you pay the spell’s cost. Exiling a card this way is simply another way to pay that cost.
11/24/2014 Delve doesn’t change a spell’s mana cost or converted mana cost. For example, the converted mana cost of Tasigur’s Cruelty (with mana cost ) is 6 even if you exile three cards to cast it.
11/24/2014 You can’t exile cards to pay for the colored mana requirements of a spell with delve.
11/24/2014 You can’t exile more cards than the generic mana requirement of a spell with delve. For example, you can’t exile more than five cards from your graveyard to cast Tasigur’s Cruelty.
11/24/2014 Because delve isn’t an alternative cost, it can be used in conjunction with alternative costs.
Posts Quoted:
Reply
Clear All Quotes
Back to Top