Sign In Register
2019 Holiday Exchange!
A New and Exciting Beginning
The End of an Era
Avg Price $2.00
Buy on TCGPlayer
​ 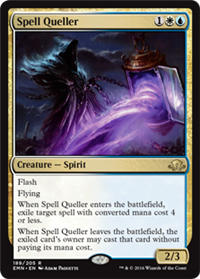 When Spell Queller leaves the battlefield, the exiled card's owner may cast that card without paying its mana cost.

7/13/2016 For spells with in their mana costs, use the value chosen for X to determine if the spell’s converted mana cost is 4 or less.
7/13/2016 Spells that can’t be countered can be exiled by Spell Queller’s ability. They won’t resolve.
7/13/2016 If the exiled card’s owner casts it, the spell has no relation to the spell that player originally cast. Any choices made for the original spell or effects affecting the original spell aren’t carried over to the new one.
7/13/2016 If the player casts the exiled card, they do so as part of the resolution of Spell Queller’s last ability. The player can’t wait to cast it later in the turn. Timing permissions based on the card’s type are ignored, but other restrictions (such as “Cast [this card] only during combat”) are not.
7/13/2016 If a player casts a card “without paying its mana cost,” they can’t choose to cast it for any alternative costs, such as emerge costs. The player can, however, pay additional costs, such as escalate costs. If the card has any mandatory additional costs, those must be paid to cast the card.
7/13/2016 If the card has in its mana cost, the player must choose 0 as the value of X when casting it without paying its mana cost.
7/13/2016 If Spell Queller leaves the battlefield before its enters-the-battlefield triggered ability resolves, its leaves-the-battlefield triggered ability triggers, resolves, and does nothing. Then its first triggered ability resolves and exiles the spell forever.
Posts Quoted:
Reply
Clear All Quotes
Back to Top