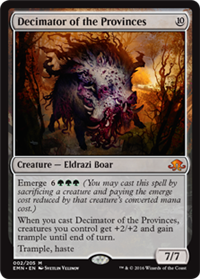 Emerge 6GGG (You may cast this spell by sacrificing a creature and paying the emerge cost reduced by that creature's converted mana cost.)

When you cast this spell, creatures you control get +2/+2 and gain trample until end of turn.