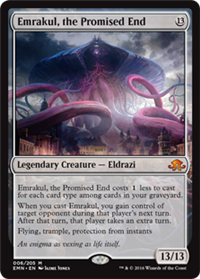 This spell costs 1 less to cast for each card type among cards in your graveyard.

When you cast this spell, you gain control of target opponent during that player's next turn. After that turn, that player takes an extra turn.

7/13/2016 The card types that could appear in your graveyard are artifact, creature, enchantment, instant, land, planeswalker, sorcery, and tribal (a card type that appears on some older cards). Supertypes (such as legendary and basic) and subtypes (such as Human and Equipment) are not counted. The maximum discount that Emrakul’s own ability can provide is .
7/13/2016 Protection from instants means that Emrakul can’t be the target of instant spells or activated or triggered abilities from instant cards, and damage that would be dealt to it by instant spells or cards is prevented. Instant spells may still affect it in other ways; for example, it would still receive the bonus from Borrowed Grace.
7/13/2016 Protection abilities only apply while the object with the ability is on the battlefield. Notably, Emrakul may be the target of a spell that targets it while on the stack, such as Convolute.
7/13/2016 The player you’re controlling is still the active player during that turn.
7/13/2016 While controlling another player, you also continue to make your own choices and decisions.
7/13/2016 While controlling another player, you make all choices and decisions that player is allowed to make or is told to make during that turn. This includes choices about what spells to cast or what abilities to activate, as well as any decisions called for by triggered abilities or for any other reason.
7/13/2016 You can’t make the affected player concede. That player may choose to concede at any time, even while you’re controlling that player.
7/13/2016 You can’t make any illegal decisions or illegal choices—you can’t do anything that player couldn’t do. You can’t make choices or decisions for that player that aren’t called for by the game rules or by any cards, permanents, spells, abilities, and so on. If an effect causes another player to make decisions that the affected player would normally make (such as Master Warcraft does), that effect takes precedence. In other words, if the affected player wouldn’t make a decision, you wouldn’t make that decision on that player’s behalf.
7/13/2016 You also can’t make any choices or decisions for the player that would be called for by the tournament rules (such as whether to take an intentional draw or whether to call a judge).
7/13/2016 You can use only the affected player’s resources (cards, mana, and so on) to pay costs for that player; you can’t use your own. Similarly, you can use the affected player’s resources only to pay that player’s costs; you can’t spend them on your costs.
7/13/2016 You only control the player. You don’t control any of that player’s permanents, spells, or abilities.
7/13/2016 If the targeted player skips their next turn, you’ll control the next turn the affected player actually takes, and the extra turn the player takes will be after that turn.
7/13/2016 Multiple player-controlling effects that affect the same player overwrite each other. The last one to be created is the one that works. If multiple players have cast Emrakul and targeted the same player, each ability’s effect will create an extra turn.
7/13/2016 If the targeted player loses the game while you control their turn during a multiplayer game, no extra turn is created.
7/13/2016 In a Two-Headed Giant game, gaining control of a player causes you to gain control of each player on that team.
7/13/2016 A “when you cast” triggered ability resolves before the original spell resolves. It resolves even if the original spell is countered, and the original spell resolves even if the triggered ability is countered.
7/13/2016 While controlling another player, you can see all cards in the game that player can see. This includes cards in that player’s hand, face-down cards that player controls, and any cards in that player’s library the player may look at.
7/13/2016 Controlling a player doesn’t allow you to look at that player’s sideboard. If an effect instructs that player to choose a card from outside the game, you can’t have that player choose any card.
Posts Quoted:
Reply
Clear All Quotes
Back to Top