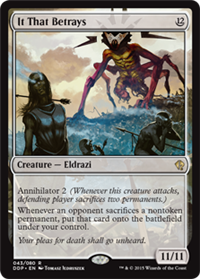 Whenever an opponent sacrifices a nontoken permanent, put that card onto the battlefield under your control.

6/15/2010 Annihilator abilities trigger and resolve during the declare attackers step. The defending player chooses and sacrifices the required number of permanents before they declare blockers. Any creatures sacrificed this way won’t be able to block.
6/15/2010 If a creature with annihilator is attacking a planeswalker, and the defending player chooses to sacrifice that planeswalker, the attacking creature continues to attack. It may be blocked. If it isn’t blocked, it simply won’t deal combat damage to anything.
6/15/2010 The second ability triggers whenever an opponent sacrifices a nontoken permanent for any reason, not just due to the annihilator ability.
6/15/2010 It doesn’t matter whose graveyard the permanent is put into, only that it was last controlled by, and sacrificed by, an opponent.
6/15/2010 If an opponent sacrifices a nontoken permanent as part of paying the cost of a spell or ability, the second ability triggers and goes on the stack on top of it. This ability will resolve, causing you to return the card to the battlefield before the other spell or ability resolves.
6/15/2010 When the second ability resolves, you must return the card to the battlefield, even if you don’t want to.
6/15/2010 If an opponent sacrifices an Aura, you’ll choose what it enchants as you return it to the battlefield. No player can respond to the choice. Since an Aura doesn’t target anything if it isn’t cast as a spell, you can enchant a permanent with shroud this way.
6/15/2010 If the sacrificed permanent that caused the second ability to trigger somehow leaves the graveyard before the ability resolves (possibly because it was returned to the battlefield by the ability of another It That Betrays), the ability simply won’t do anything when it resolves.
Posts Quoted:
Reply
Clear All Quotes
Back to Top