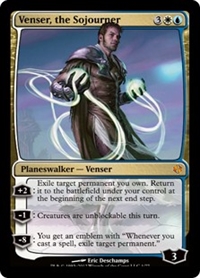 +2: Exile target permanent you own. Return it to the battlefield under your control at the beginning of the next end step.

−1: Creatures can't be blocked this turn.

−8: You get an emblem with "Whenever you cast a spell, exile target permanent."

1/1/2011 Emblems behave similarly to enchantments: They have an ability that, in a general sense, continually affects the game. The primary difference between them is that emblems aren’t permanents and don’t exist on the battlefield. Nothing in the game can remove an emblem, simply because no other spell or ability references them. Once you get an emblem, you keep it for the rest of the game. Emblems have no color, name, card type, or other characteristics beyond the listed ability.
1/1/2011 The first ability can target any permanent you own, including those another player controls.
1/1/2011 If the first ability exiles a token, that token will cease to exist. It won’t return to the battlefield.
1/1/2011 A permanent exiled by the first ability will return to the battlefield under your control at the beginning of the next end step even if you no longer control Venser at that time.
1/1/2011 Venser’s second ability doesn’t lock in what it applies to. That’s because the effect states a true thing about creatures, but doesn’t actually change the characteristics of those creatures. As a result, all creatures can’t be blocked that turn, including creatures you don’t control, creatures that weren’t on the battlefield at the time the ability resolved, and creatures that have lost all abilities.
1/1/2011 Venser’s last ability creates an emblem with a triggered ability. The emblem is the source of the triggered ability. Because emblems are colorless, you can target permanents with protection from white or from blue, for example, with the triggered ability.
1/1/2011 Whenever you cast a spell, the emblem’s ability triggers and goes on the stack on top of it. It will resolve before the spell does.
1/1/2011 If you control more than one such emblem, each one’s ability will trigger separately whenever you cast a spell.
Posts Quoted:
Reply
Clear All Quotes
Back to Top