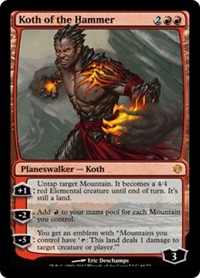 +1: Untap target Mountain. It becomes a 4/4 red Elemental creature until end of turn. It's still a land.

−2: Add R for each Mountain you control.

−5: You get an emblem with "Mountains you control have ‘T: This land deals 1 damage to any target.'"

1/1/2011 Emblems behave similarly to enchantments: They have an ability that, in a general sense, continually affects the game. The primary difference between them is that emblems aren’t permanents and don’t exist on the battlefield. Nothing in the game can remove an emblem, simply because no other spell or ability references them. Once you get an emblem, you keep it for the rest of the game. Emblems have no color, name, card type, or other characteristics beyond the listed ability.
1/1/2011 Koth’s first ability can target any Mountain, including an untapped Mountain and/or a Mountain another player controls.
1/1/2011 If Koth’s first ability animates a Mountain that came under your control that turn, it will have “summoning sickness” and be unable to attack. It will also be unable to be tapped to activate an ability with the symbol in its cost, such as the Mountain’s mana ability or the ability granted to it by Koth’s emblem.
1/1/2011 Loyalty abilities can’t be mana abilities. Koth’s second ability uses the stack and can be countered or otherwise responded to. Like all loyalty abilities, it can be activated only once per turn, during your main phase, when the stack is empty, and only if no other loyalty abilities of this permanent have been activated this turn.
1/1/2011 Koth’s emblem grants an activated ability to each Mountain you control at any given time for the rest of the game. It will continuously check which permanents you control are Mountains to determine what has the ability. For example, a Mountain that comes under your control later in the game will have the ability, while a Mountain you controlled at the time the emblem was created, but that later came under the control of another player, will no longer have the ability.
Posts Quoted:
Reply
Clear All Quotes
Back to Top