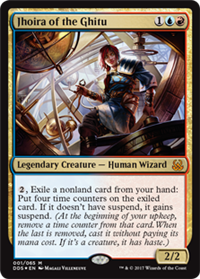 2, Exile a nonland card from your hand: Put four time counters on the exiled card. If it doesn't have suspend, it gains suspend. (At the beginning of your upkeep, remove a time counter from that card. When the last is removed, cast it without paying its mana cost. If it's a creature, it has haste.)