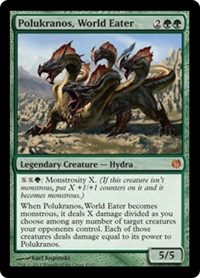 XXG: Monstrosity X. (If this creature isn't monstrous, put X +1/+1 counters on it and it becomes monstrous.)

When Polukranos, World Eater becomes monstrous, it deals X damage divided as you choose among any number of target creatures your opponents control. Each of those creatures deals damage equal to its power to Polukranos.

9/15/2013 The value of X in Polukranos’s last ability is equal to the value chosen for X when its activated ability was activated.
9/15/2013 The number of targets chosen for the triggered ability must be at least one (if X wasn’t 0) and at most X. You choose the division of damage as you put the ability on the stack, not as it resolves. Each target must be assigned at least 1 damage. In multiplayer games, you may choose creatures controlled by different opponents.
9/15/2013 If some, but not all, of the ability’s targets become illegal, you can’t change the division of damage. Damage that would’ve been dealt to illegal targets simply isn’t dealt.
9/15/2013 As Polukranos’s triggered ability resolves, Polukranos deals damage first, then the target creatures do. Although no creature will die until after the ability finishes resolving, the order could matter if Polukranos has wither or infect.
9/15/2013 Once a creature becomes monstrous, it can’t become monstrous again. If the creature is already monstrous when the monstrosity ability resolves, nothing happens.
9/15/2013 Monstrous isn’t an ability that a creature has. It’s just something true about that creature. If the creature stops being a creature or loses its abilities, it will continue to be monstrous.
9/15/2013 An ability that triggers when a creature becomes monstrous won’t trigger if that creature isn’t on the battlefield when its monstrosity ability resolves.
Posts Quoted:
Reply
Clear All Quotes
Back to Top