Sign In Register
2019 Holiday Exchange!
A New and Exciting Beginning
The End of an Era
Avg Price $0.43
Buy on TCGPlayer
​ 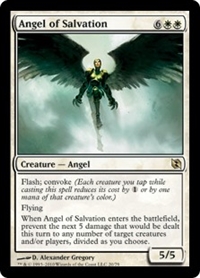 Flash; convoke (Your creatures can help cast this spell. Each creature you tap while casting this spell pays for 1 or one mana of that creature's color.)

When Angel of Salvation enters the battlefield, prevent the next 5 damage that would be dealt this turn to any number of targets, divided as you choose.

5/1/2007 You choose how the damage prevention shields will be divided when you put the triggered ability on the stack. The number of targets must be at least one and at most five.
7/18/2014 The rules for convoke have changed slightly since it last appeared in an expansion. Previously, convoke reduced the cost to cast a spell. Under current rules, you tap creatures at the same time you pay the spell’s costs. Tapping a creature this way is simply another way to pay.
7/18/2014 Convoke doesn’t change a spell’s mana cost or converted mana cost.
7/18/2014 When calculating a spell’s total cost, include any alternative costs, additional costs, or anything else that increases or reduces the cost to cast the spell. Convoke applies after the total cost is calculated.
7/18/2014 Because convoke isn’t an alternative cost, it can be used in conjunction with alternative costs.
7/18/2014 Tapping a multicolored creature using convoke will pay for or one mana of your choice of any of that creature’s colors.
7/18/2014 When using convoke to cast a spell with in its mana cost, first choose the value for X. That choice, plus any cost increases or decreases, will determine the spell’s total cost. Then you can tap creatures you control to help pay that cost. For example, if you cast Chord of Calling (a spell with convoke and mana cost ) and choose X to be 3, the total cost is . If you tap two green creatures and two red creatures, you’ll have to pay .
7/18/2014 If a creature you control has a mana ability with in the cost, activating that ability while casting a spell with convoke will result in the creature being tapped when you pay the spell’s costs. You won’t be able to tap it again for convoke. Similarly, if you sacrifice a creature to activate a mana ability while casting a spell with convoke, that creature won’t be on the battlefield when you pay the spell’s costs, so you won’t be able to tap it for convoke.
Posts Quoted:
Reply
Clear All Quotes
Back to Top