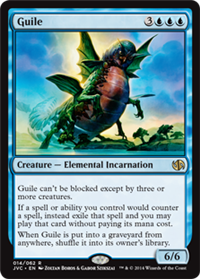 Guile can't be blocked except by three or more creatures.

If a spell or ability you control would counter a spell, instead exile that spell and you may play that card without paying its mana cost.

When Guile is put into a graveyard from anywhere, shuffle it into its owner's library.