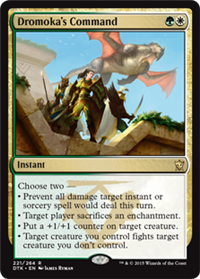 • Prevent all damage target instant or sorcery spell would deal this turn.

2/25/2015 Although most instants and sorceries that cause damage to be dealt are the sources of that damage, a few cause other objects to deal damage (for example, spells that cause creatures to fight). The first ability of Dromoka’s Command won’t prevent damage caused by those other sources.
2/25/2015 You can target any player with the second ability, including one that doesn’t control an enchantment.
2/25/2015 You choose the two modes as you cast the spell. You must choose two different modes. Once modes are chosen, they can’t be changed.
2/25/2015 You can choose a mode only if you can choose legal targets for that mode. Ignore the targeting requirements for modes that aren’t chosen. For example, you can cast Ojutai’s Command without targeting a creature spell provided you don’t choose the third mode.
2/25/2015 As the spell resolves, follow the instructions of the modes you chose in the order they are printed on the card. For example, if you chose the second and fourth modes of Ojutai’s Command, you would gain 4 life and then draw a card. (The order won’t matter in most cases.)
2/25/2015 If a Command is copied, the effect that creates the copy will usually allow you to choose new targets for the copy, but you can’t choose new modes.
2/25/2015 If all targets for the chosen modes become illegal before the Command resolves, the spell won’t resolve and none of its effects will happen. If at least one target is still legal, the spell will resolve but will have no effect on any illegal targets.
Posts Quoted:
Reply
Clear All Quotes
Back to Top