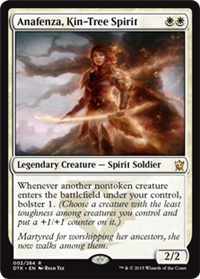 Whenever another nontoken creature enters the battlefield under your control, bolster 1. (Choose a creature with the least toughness among creatures you control and put a +1/+1 counter on it.)

2/25/2015 Bolster itself doesn’t target any creature, though some spells and abilities that bolster may have other effects that target creatures. For example, you could put counters on a creature with protection from white with Aven Tactician’s bolster ability.
2/25/2015 You determine which creature to put counters on as the spell or ability that instructs you to bolster resolves. That could be the creature with the bolster ability, if it’s still under your control and has the least toughness.
Posts Quoted:
Reply
Clear All Quotes
Back to Top