Sign In Register
2019 Holiday Exchange!
A New and Exciting Beginning
The End of an Era
Avg Price $6.25
Buy on TCGPlayer
​ 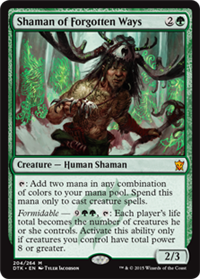 T: Add two mana in any combination of colors. Spend this mana only to cast creature spells.

Formidable — 9GG, T: Each player's life total becomes the number of creatures they control. Activate this ability only if creatures you control have total power 8 or greater.