Sign In Register
2019 Holiday Exchange!
A New and Exciting Beginning
The End of an Era
Avg Price $1.06
Buy on TCGPlayer
​ 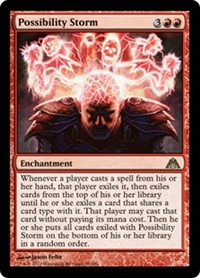 Whenever a player casts a spell from their hand, that player exiles it, then exiles cards from the top of their library until they exile a card that shares a card type with it. That player may cast that card without paying its mana cost. Then they put all cards exiled with Possibility Storm on the bottom of their library in a random order.

4/15/2013 Artifact, creature, enchantment, instant, land, planeswalker, sorcery, and tribal are card types. Two cards share a card type if they have at least one card type in common.
4/15/2013 The original spell is part of the group of exiled cards put on the bottom of the library in a random order. If the exiled card that shared a card type with that card wasn’t cast, it’s also part of this group.
4/15/2013 If Possibility Storm’s ability doesn’t exile the original spell (perhaps because another Possibility Storm already exiled it), you’ll still exile cards from the top of your library until you exile a card that shares a card type with it and have the opportunity to cast that spell.
4/15/2013 If you cast a spell without paying its mana cost, you can’t choose to cast it for any alternative costs, such as overload costs. You can pay additional costs, such as kicker costs. If the spell has any mandatory additional costs, you must pay those.
4/15/2013 If the spell you cast from exile has X in its mana cost, you must choose 0 as its value.
4/15/2013 Instant and sorcery cards with miracle allow a player to cast a card immediately upon drawing it. If a player casts a spell this way, the spell is cast from that player’s hand. Possibility Storm will trigger.
Posts Quoted:
Reply
Clear All Quotes
Back to Top