Sign In Register
2019 Holiday Exchange!
A New and Exciting Beginning
The End of an Era
Avg Price $0.31
Buy on TCGPlayer
​ 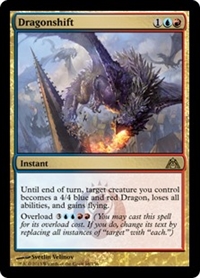 Until end of turn, target creature you control becomes a blue and red Dragon with base power and toughness 4/4, loses all abilities, and gains flying.

Overload 3UURR (You may cast this spell for its overload cost. If you do, change its text by replacing all instances of "target" with "each.")

4/15/2013 If you don’t pay the overload cost of a spell, that spell will have a single target. If you pay the overload cost, the spell won’t have any targets.
4/15/2013 Because a spell with overload doesn’t target when its overload cost is paid, it may affect permanents with hexproof or with protection from the appropriate color.
4/15/2013 Note that if the spell with overload is dealing damage, protection from that spell’s color will still prevent that damage.
4/15/2013 Overload doesn’t change when you can cast the spell.
4/15/2013 Casting a spell with overload doesn’t change that spell’s mana cost. You just pay the overload cost instead.
4/15/2013 Effects that cause you to pay more or less for a spell will cause you to pay that much more or less while casting it for its overload cost, too.
4/15/2013 If you are instructed to cast a spell with overload “without paying its mana cost,” you can’t choose to pay its overload cost instead.
4/15/2013 If you cast Dragonshift using overload, only creatures you control when it resolves will be affected. Creatures that come under your control later in the turn will not.
4/15/2013 Each affected creature will lose all other colors and creature types and be only red, blue, and a Dragon. Each will retain any other types it may have had, such as artifact.
4/15/2013 Each affected creature will lose any abilities it may have gained prior to Dragonshift resolving. Notably, this includes the ability to cast the copies of a card with cipher that’s encoded on the creature, although that ability will return after the turn ends.
4/15/2013 If any of the affected creatures gains an ability after Dragonshift resolves, it will keep that ability.
4/15/2013 Dragonshift overwrites all previous effects that set a creature’s power or toughness to specific values. However, effects that set a creature’s power or toughness to specific values that start to apply after Dragonshift resolves will overwrite this effect.
4/15/2013 Effects that modify the power or toughness of an affected creature, such as the effects of Phytoburst or Legion’s Initiative, will apply to it no matter when they started to take effect. The same is true for counters that change the creature’s power or toughness (such as +1/+1 counters) and effects that switch its power and toughness.
Posts Quoted:
Reply
Clear All Quotes
Back to Top