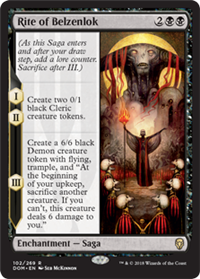 III — Create a 6/6 black Demon creature token with flying, trample, and "At the beginning of your upkeep, sacrifice another creature. If you can't, this creature deals 6 damage to you."