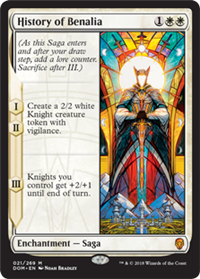 I, II — Create a 2/2 white Knight creature token with vigilance.