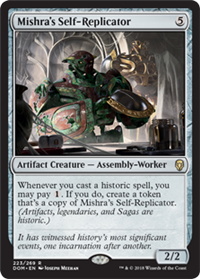 Whenever you cast a historic spell, you may pay 1. If you do, create a token that's a copy of Mishra's Self-Replicator. (Artifacts, legendaries, and Sagas are historic.)