Sign In Register
2019 Holiday Exchange!
A New and Exciting Beginning
The End of an Era
Avg Price $0.30
Buy on TCGPlayer
​ 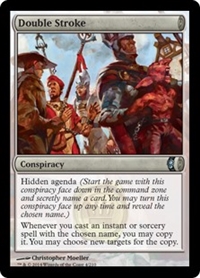 Whenever you cast an instant or sorcery spell with the chosen name, you may copy it. You may choose new targets for the copy.

5/29/2014 You must turn Double Stroke face up before you cast the spell with the chosen name to have Double Stroke’s second ability trigger.
5/29/2014 When the ability resolves, it creates a copy of the spell. You control the copy. That copy is created on the stack, so it’s not “cast.” Abilities that trigger when a player casts a spell won’t trigger. The copy will resolve like a normal spell, after players get a chance to cast spells and activate abilities.
5/29/2014 The copy will have the same targets as the spell it’s copying unless you choose new ones. You may change any number of the targets, including all of them or none of them. If, for one of the targets, you can’t choose a new legal target, then it remains unchanged (even if the current target is illegal).
5/29/2014 If the spell being copied is modal (that is, it says “Choose one —” or the like), the copy will have the same mode. You can’t choose a different one.
5/29/2014 If the spell being copied has an X whose value was determined as it was cast (like Skeletal Scrying has), the copy will have the same value of X.
5/29/2014 Effects based on any additional costs that were paid for the original spell will be copied as though those same costs were paid for the copy. For example, if a player exiles three cards from their graveyard to cast Skeletal Scrying, and you copy it, the copy will also cause you to draw three cards and lose 3 life (but you won’t exile any cards from your graveyard).
8/23/2016 Conspiracies are never put into your deck. Instead, you put any number of conspiracies from your card pool into the command zone as the game begins. These conspiracies are face up unless they have hidden agenda, in which case they begin the game face down.
8/23/2016 A conspiracy doesn’t count as a card in your deck for purposes of meeting minimum deck size requirements. (In most drafts, the minimum deck size is 40 cards.)
8/23/2016 You don’t have to play with any conspiracy you draft. However, you have only one opportunity to put conspiracies into the command zone, as the game begins. You can’t put conspiracies into the command zone after this point.
8/23/2016 You can look at any player’s face-up conspiracies at any time. You’ll also know how many face-down conspiracies a player has in the command zone, although you won’t know what they are.
8/23/2016 A conspiracy’s static and triggered abilities function as long as that conspiracy is face-up in the command zone.
8/23/2016 Conspiracies are colorless, have no mana cost, and can’t be cast as spells.
8/23/2016 Conspiracies aren’t legal for any sanctioned Constructed format, but may be included in other Limited formats, such as Cube Draft.
8/23/2016 You name the card as the game begins, as you put the conspiracy into the command zone, not as you turn the face-down conspiracy face up.
8/23/2016 There are several ways to secretly name a card, including writing the name on a piece of paper that’s kept with the face-down conspiracy. If you have multiple face-down conspiracies, you may name a different card for each one. It’s important that each named card is clearly associated with only one of the conspiracies.
8/23/2016 You must name a Magic card. Notably, you can’t name a token (except in the unusual case that a token’s name matches the name of a card, such as Illusion).
8/23/2016 If you play multiple games after the draft, you can name a different card in each new game.
8/23/2016 As a special action, you may turn a face-down conspiracy face up. You may do so any time you have priority. This action doesn’t use the stack and can’t be responded to. Once face up, the named card is revealed and the conspiracy’s abilities will affect the game.
8/23/2016 At the end of the game, you must reveal any face-down conspiracies you own in the command zone to all players.
8/23/2016 A conspiracy with hidden agenda that has a triggered ability must be face up before that ability’s trigger condition is met in order for it to trigger. Turning it face up afterward won’t have any effect.
8/23/2016 At the end of the game, you must reveal any face-down conspiracies you own in the command zone to all players. Notably, you can’t bluff conspiracies with hidden agenda by putting other cards into the command zone face down as the game starts.
Posts Quoted:
Reply
Clear All Quotes
Back to Top