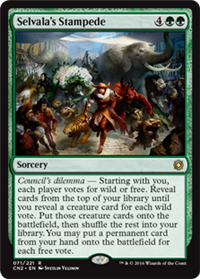 8/23/2016 The creature cards revealed for the wild votes all enter the battlefield at the same time, followed by the permanent cards put onto the battlefield from your hand for the free votes.
8/23/2016 Any abilities that trigger because of any of those cards entering the battlefield are put onto the stack at the same time, after Selvala’s Stampede finishes resolving. You choose the order that abilities you control go on the stack, followed by each other player in turn order choosing the order for abilities they control. The last ability to be put on the stack will resolve first.
8/23/2016 Unlike the will of the council cards from the original Conspiracy set, where a majority of votes determined what happened, each vote made for a council’s dilemma card adds to the ultimate effect.
8/23/2016 The effects of each council’s dilemma ability happen in the stated order. First the vote occurs, then the first effect, and finally the second effect.
8/23/2016 Because the votes are made in turn order, each player will know the votes of players who voted beforehand.
8/23/2016 You must vote for one of the available options. You can’t abstain.
8/23/2016 If a creature with an enters-the-battlefield council’s dilemma ability leaves the battlefield before that ability resolves, players can still vote for any option that would put +1/+1 counters on that creature, even though—or perhaps especially because—those votes won’t generate an effect.
8/23/2016 No player votes until the spell or ability resolves. Any responses to that spell or ability must be made without knowing the outcome of the vote.
8/23/2016 Players can’t do anything between voting and finishing the resolution of the spell or ability that included the vote.
Posts Quoted:
Reply
Clear All Quotes
Back to Top