Sign In Register
2019 Holiday Exchange!
A New and Exciting Beginning
The End of an Era
Avg Price $26.98
Buy on TCGPlayer
​ 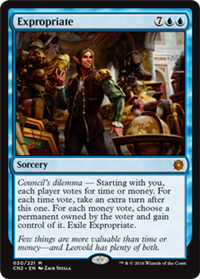 Council's dilemma — Starting with you, each player votes for time or money. For each time vote, take an extra turn after this one. For each money vote, choose a permanent owned by the voter and gain control of it. Exile Expropriate.

8/23/2016 Expropriate doesn’t target any of the permanents you gain control of. You could choose a permanent with hexproof, for example. (Hey, money talks.)
8/23/2016 You can vote money to gain control of a permanent you own, no matter who controls it.
8/23/2016 Unlike the will of the council cards from the original Conspiracy set, where a majority of votes determined what happened, each vote made for a council’s dilemma card adds to the ultimate effect.
8/23/2016 The effects of each council’s dilemma ability happen in the stated order. First the vote occurs, then the first effect, and finally the second effect.
8/23/2016 Because the votes are made in turn order, each player will know the votes of players who voted beforehand.
8/23/2016 You must vote for one of the available options. You can’t abstain.
8/23/2016 If a creature with an enters-the-battlefield council’s dilemma ability leaves the battlefield before that ability resolves, players can still vote for any option that would put +1/+1 counters on that creature, even though—or perhaps especially because—those votes won’t generate an effect.
8/23/2016 No player votes until the spell or ability resolves. Any responses to that spell or ability must be made without knowing the outcome of the vote.
8/23/2016 Players can’t do anything between voting and finishing the resolution of the spell or ability that included the vote.
Posts Quoted:
Reply
Clear All Quotes
Back to Top