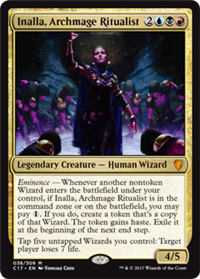 Eminence — Whenever another nontoken Wizard enters the battlefield under your control, if Inalla, Archmage Ritualist is in the command zone or on the battlefield, you may pay 1. If you do, create a token that's a copy of that Wizard. The token gains haste. Exile it at the beginning of the next end step.