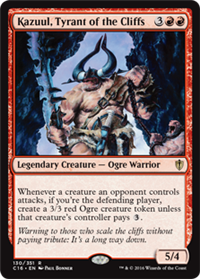 Whenever a creature an opponent controls attacks, if you're the defending player, create a 3/3 red Ogre creature token unless that creature's controller pays 3.

3/1/2010 You’re the defending player if a creature is attacking you or a planeswalker you control.
3/1/2010 If you’re the defending player, Kazuul’s ability triggers once for each creature that attacks, not just once per combat. The attacking player chooses whether to pay or let you have an Ogre token each time one of those abilities resolves.
3/1/2010 As the ability resolves, you can’t put the Ogre token onto the battlefield without explicitly giving the attacking player the option to pay , even if the attacking player has forgotten about this ability.
3/1/2010 The ability triggers and resolves during the declare attackers step. If you put an Ogre token onto the battlefield as a result, you may block with it during that combat phase.
3/1/2010 If an attacking creature has a “Whenever this creature attacks” ability, that ability is put on the stack first, then Kazuul’s ability is put on the stack. Although Kazuul’s ability will resolve first, and potentially create an Ogre token, any target of the other ability will already have been chosen at this point, and thus could not have been the new Ogre token.
3/1/2010 In a multiplayer game, the ability checks whether you’re the defending player for each individual attacking creature. For example, if one creature attacks you and two creatures attack another player, Kazuul’s ability triggers just once.
Posts Quoted:
Reply
Clear All Quotes
Back to Top