Sign In Register
2019 Holiday Exchange!
A New and Exciting Beginning
The End of an Era
Avg Price $2.24
Buy on TCGPlayer
​ 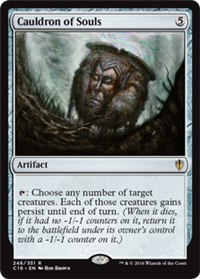 T: Choose any number of target creatures. Each of those creatures gains persist until end of turn. (When it dies, if it had no -1/-1 counters on it, return it to the battlefield under its owner's control with a -1/-1 counter on it.)