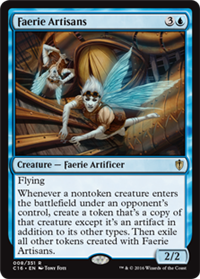 Whenever a nontoken creature enters the battlefield under an opponent's control, create a token that's a copy of that creature except it's an artifact in addition to its other types. Then exile all other tokens created with Faerie Artisans.