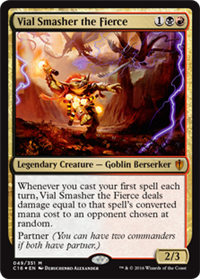 Whenever you cast your first spell each turn, choose an opponent at random. Vial Smasher the Fierce deals damage equal to that spell's converted mana cost to that player or a planeswalker that player controls.

11/8/2016 Vial Smasher’s triggered ability triggers when you cast your first spell each turn, regardless of whose turn it is.
11/8/2016 Vial Smasher has to be on the battlefield at the moment you cast your first spell. If that spell causes Vial Smasher to leave the battlefield as an additional cost to cast it, Vial Smasher’s ability can’t trigger. If that spell is Vial Smasher itself, Vial Smasher’s ability can’t trigger.
11/8/2016 For spells with in their mana costs, use the value chosen for X to determine the spell’s converted mana cost.
11/8/2016 Vial Smasher’s triggered ability resolves before the spell that caused it to trigger. If Vial Smasher’s ability resolves and the spell that caused it to trigger has been countered, use that spell’s converted mana cost as it last existed on the stack to determine how much damage is dealt.
11/8/2016 The opponent to be dealt damage is chosen at random while the triggered ability is resolving. No player may take any actions between choosing the player and dealing that player damage.
11/8/2016 If your Commander deck has two commanders, you can only include cards whose own color identities are also found in your commanders’ combined color identities. If Akiri and Silas Renn are your commanders, your deck may contain cards with white, blue, black, and red in their color identity, but not green.
11/8/2016 Both commanders start in the command zone, and the remaining 98 cards of your deck are shuffled to become your library.
11/8/2016 To have two commanders, both must have the partner ability as the game begins. Losing the ability during the game doesn’t cause either to cease to be your commander.
11/8/2016 Once the game begins, your two commanders are tracked separately. If you cast one, you won’t have to pay an additional the first time you cast the other. A player loses the game after having been dealt 21 damage from one of them, not from both of them combined. Command Beacon’s effect puts one into your hand from the command zone, not both.
11/8/2016 An effect that checks whether you control your commander is satisfied if you control one or both of your two commanders.
Posts Quoted:
Reply
Clear All Quotes
Back to Top