Sign In Register
2019 Holiday Exchange!
A New and Exciting Beginning
The End of an Era
Avg Price $8.55
Buy on TCGPlayer
​ 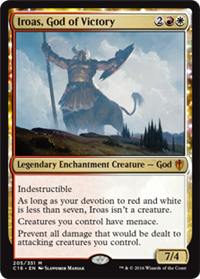 As long as your devotion to red and white is less than seven, Iroas isn't a creature.

Creatures you control have menace.

Prevent all damage that would be dealt to attacking creatures you control.