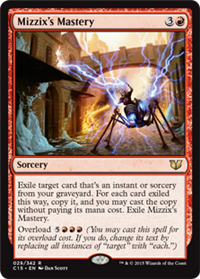 Exile target card that's an instant or sorcery from your graveyard. For each card exiled this way, copy it, and you may cast the copy without paying its mana cost. Exile Mizzix's Mastery.

Overload 5RRR (You may cast this spell for its overload cost. If you do, change its text by replacing all instances of "target" with "each.")

11/4/2015 If Mizzix’s Mastery exiled multiple cards, you may cast the copies in any order. The last copy you cast will be the first one to resolve.
11/4/2015 If you don’t cast one of the copies (perhaps because there are no legal targets available or you don’t want to), the copy will cease to exist.
11/4/2015 Mizzix’s Mastery is still on the stack as it resolves. If you pay the overload cost, Mizzix’s Mastery won’t be exiled or copied.
11/4/2015 The copies are created and cast during the resolution of Mizzix’s Mastery. You can’t wait to cast them later in the turn. Timing restrictions based on the copy’s type are ignored. Other restrictions (such as “Cast [this name] only during combat”) are not.
11/4/2015 If you cast a spell “without paying its mana cost,” you can’t pay any alternative costs. You can, however, pay additional costs, such as kicker costs. If the card has any mandatory additional costs, you must pay those.
11/4/2015 If the copy has in its mana cost, you must choose 0 as the value of X.
11/4/2015 The cards remain exiled no matter what happens to the copies.
Posts Quoted:
Reply
Clear All Quotes
Back to Top