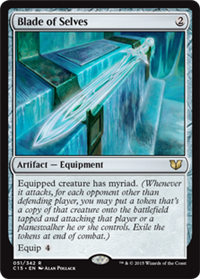 Equipped creature has myriad. (Whenever it attacks, for each opponent other than defending player, you may create a token that's a copy of that creature that's tapped and attacking that player or a planeswalker they control. Exile the tokens at end of combat.)