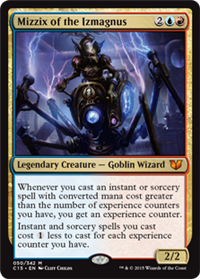 Instant and sorcery spells you cast cost 1 less to cast for each experience counter you have.

11/4/2015 You finish casting a spell, including paying its costs, before Mizzix’s first ability triggers. The ability that gives you the experience counter will resolve before the spell that caused it to trigger.
11/4/2015 Mizzix’s last ability doesn’t change the mana cost or converted mana cost of any spell. It changes only the total cost you pay.
11/4/2015 Mizzix’s last ability can’t reduce the amount of colored mana you pay for a spell. It reduces only the generic component of that cost.
11/4/2015 If there are additional costs to cast a spell, or if the cost to cast a spell is increased by an effect (such as the one created by Thalia, Guardian of Thraben’s ability), apply those increases before applying cost reductions.
11/4/2015 The cost reduction can apply to alternative costs such as flashback costs.
11/4/2015 If an instant or sorcery spell you cast has in its mana cost, you choose the value of X before calculating the spell’s total cost. For example, if that spell’s mana cost is and you have one experience counter, you could choose 5 as the value of X and pay to cast the spell.
11/4/2015 Experience counters are the second kind of counters a player can have, joining poison.
11/4/2015 All experience counters are identical, no matter how you got them. For example, the last ability will count experience counters that you got from the first ability, from another ability, from proliferating, and so on.
11/4/2015 Each game pack includes a card labeled “Experience” with the suggestion “Place your experience counters here.” This card isn’t required for play. It’s simply a convenient spot to put your experience counters, which can be represented with dice, glass beads, or other small items.
Posts Quoted:
Reply
Clear All Quotes
Back to Top