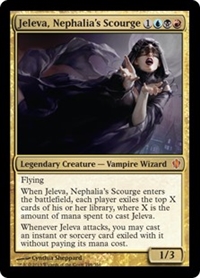 When Jeleva, Nephalia's Scourge enters the battlefield, each player exiles the top X cards of their library, where X is the amount of mana spent to cast Jeleva.

Whenever Jeleva attacks, you may cast an instant or sorcery card exiled with it without paying its mana cost.

10/17/2013 If Jeleva leaves the battlefield, the exiled cards will remain exiled indefinitely. If Jeleva enters the battlefield again, it won’t be associated with the cards the “other” Jeleva exiled. The new Jeleva will exile a new set of cards. Only those cards can be cast using Jeleva’s last ability.
10/17/2013 If you cast an instant or sorcery card using Jeleva’s last ability, you do so while that ability is resolving. If you choose not to (or you can’t), you won’t get a chance to cast it later unless the ability triggers again.
10/17/2013 When casting an instant or sorcery card this way, ignore all timing restrictions based on the card’s type. Other timing restrictions, such as “Cast [this spell] only during combat,” must be followed.
10/17/2013 If you cast a card “without paying its mana cost,” you can’t pay alternative costs such as overload costs. However, you can pay additional costs such as kicker costs. If the card has mandatory additional costs, you must pay those.
10/17/2013 If the card has in its mana cost, you must choose 0 as its value.
10/17/2013 The card is cast before blocking creatures are declared.
2/1/2014 The amount of mana you spent to cast this creature is usually equal to its converted mana cost. However, you also include any additional costs you pay, including the cost imposed for casting your commander from the command zone.
2/1/2014 You can’t choose to pay extra mana to cast a creature spell unless something instructs you to.
2/1/2014 If Jeleva enters the battlefield without being cast, then no mana was spent to cast it. This means X will be 0, so no cards will be exiled.
Posts Quoted:
Reply
Clear All Quotes
Back to Top