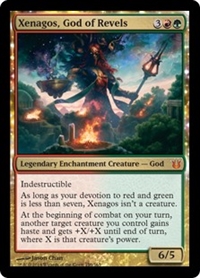 As long as your devotion to red and green is less than seven, Xenagos isn't a creature.

At the beginning of combat on your turn, another target creature you control gains haste and gets +X/+X until end of turn, where X is that creature's power.