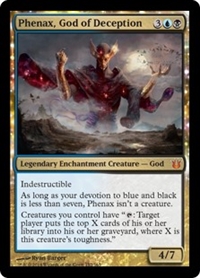 As long as your devotion to blue and black is less than seven, Phenax isn't a creature.

Creatures you control have "T: Target player puts the top X cards of their library into their graveyard, where X is this creature's toughness."