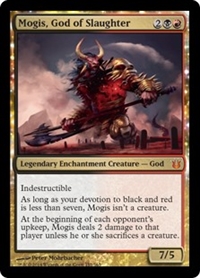 As long as your devotion to black and red is less than seven, Mogis isn't a creature.

At the beginning of each opponent's upkeep, Mogis deals 2 damage to that player unless they sacrifice a creature.