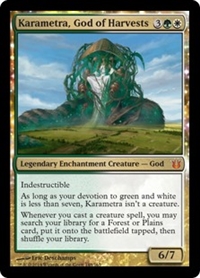 As long as your devotion to green and white is less than seven, Karametra isn't a creature.

Whenever you cast a creature spell, you may search your library for a Forest or Plains card, put it onto the battlefield tapped, then shuffle your library.