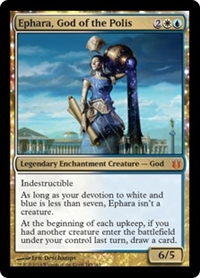 As long as your devotion to white and blue is less than seven, Ephara isn't a creature.

At the beginning of each upkeep, if you had another creature enter the battlefield under your control last turn, draw a card.