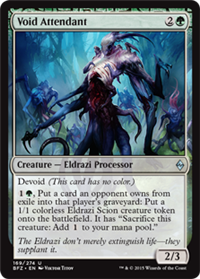 1G, Put a card an opponent owns from exile into that player's graveyard: Create a 1/1 colorless Eldrazi Scion creature token. It has "Sacrifice this creature: Add C."

8/25/2015 Once you announce that you’re activating this ability, players can’t respond until after you have paid its costs and completed activating it. Specifically, no one can try to remove the card from exile to stop you from activating the ability.
8/25/2015 Cards with devoid use frames that are variations of the transparent frame traditionally used for Eldrazi. The top part of the card features some color over a background based on the texture of the hedrons that once imprisoned the Eldrazi. This coloration is intended to aid deckbuilding and game play.
8/25/2015 A card with devoid is just colorless. It’s not colorless and the colors of mana in its mana cost.
8/25/2015 Other cards and abilities can give a card with devoid color. If that happens, it’s just the new color, not that color and colorless.
8/25/2015 Devoid works in all zones, not just on the battlefield.
8/25/2015 If a card loses devoid, it will still be colorless. This is because effects that change an object’s color (like the one created by devoid) are considered before the object loses devoid.
8/25/2015 If a spell or ability requires that you put more than one exiled card into the graveyard, you may choose cards owned by different opponents. Each card chosen will be put into its owner’s graveyard.
8/25/2015 If a replacement effect will cause cards that would be put into a graveyard from anywhere to be exiled instead (such as the one created by Anafenza, the Foremost), you can still put an exiled card into its opponent’s graveyard. The card becomes a new object and remains in exile. In this situation, you can’t use a single exiled card if required to put more than one exiled card into the graveyard. Conversely, you could use the same card in this situation if two separate spells or abilities each required you to put a single exiled card into its owner’s graveyard.
8/25/2015 You can’t look at face-down cards in exile unless an effect allows you to.
8/25/2015 Face-down cards in exile are grouped using two criteria: what caused them to be exiled face down and when they were exiled face down. If you want to put a face-down card in exile into its owner’s graveyard, you must first choose one of these groups and then choose a card from within that group at random. For example, say an artifact causes your opponent to exile their hand of three cards face down. Then on a later turn, that artifact causes your opponent to exile another two cards face down. If you use Wasteland Strangler to put one of those cards into their graveyard, you would pick the first or second pile and put a card chosen at random from that pile into the graveyard.
8/25/2015 Eldrazi Scions are similar to Eldrazi Spawn, seen in the Zendikar block. Note that Eldrazi Scions are 1/1, not 0/1.
8/25/2015 Eldrazi and Scion are each separate creature types. Anything that affects Eldrazi will affect these tokens, for example.
8/25/2015 Sacrificing an Eldrazi Scion creature token to add to your mana pool is a mana ability. It doesn’t use the stack and can’t be responded to.
8/25/2015 Some instants and sorceries that create Eldrazi Scions require targets. If all targets for such a spell have become illegal by the time that spell tries to resolve, the spell won’t resolve and none of its effects will happen. You won’t get any Eldrazi Scions.
Posts Quoted:
Reply
Clear All Quotes
Back to Top