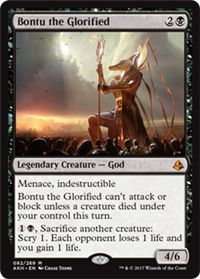 Bontu the Glorified can't attack or block unless a creature died under your control this turn.

1B, Sacrifice another creature: Scry 1. Each opponent loses 1 life and you gain 1 life.