Sign In Register
2019 Holiday Exchange!
A New and Exciting Beginning
The End of an Era
Avg Price $33.75
Buy on TCGPlayer
​ 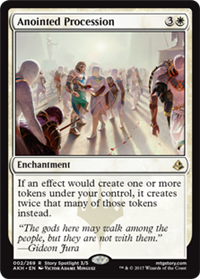 If an effect would create one or more tokens under your control, it creates twice that many of those tokens instead.

4/18/2017 All of the tokens enter the battlefield simultaneously. They’ll be created with the same name, color, type and subtype, abilities, power, toughness, and so on.
4/18/2017 If the token you create has any “as [this permanent] enters the battlefield” or “[this permanent] enters the battlefield with” abilities, first determine how many tokens are being created, then apply those abilities individually for each one. For example, if a token with “You may have [this permanent] enter the battlefield as a copy of any creature on the battlefield” would be created (such as an embalmed Vizier of Many Faces), the resulting two tokens can each copy a different creature.
4/18/2017 If an effect creates more than one kind of token, it’ll create twice as many of each kind. For example, if you cast Bestial Menace while controlling Anointed Procession, you’ll create two Snake tokens, two Wolf tokens, and two Elephant tokens.
4/18/2017 If you control two Anointed Processions, then the number of tokens created is four times the original number. If you control three, then the number of tokens created is eight times the original number, and so on.
4/18/2017 If the effect creating the tokens instructs you to do something with those tokens at a later time, like exiling them at the end of combat, you’ll do that for all the tokens.
1/19/2018 There are many important moments in the story, but the most crucial—called “story spotlights”—are shown on cards. These cards have the Planeswalker symbol in their text box; this symbol has no effect on gameplay. You can read more about these events in the official Magic fiction at http://www.mtgstory.com.
Posts Quoted:
Reply
Clear All Quotes
Back to Top