Sign In Register
2019 Holiday Exchange!
A New and Exciting Beginning
The End of an Era
Avg Price $3.49
Buy on TCGPlayer
​ 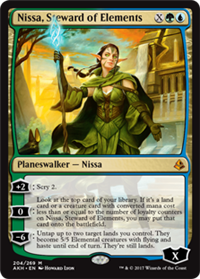 0: Look at the top card of your library. If it's a land card or a creature card with converted mana cost less than or equal to the number of loyalty counters on Nissa, Steward of Elements, you may put that card onto the battlefield.

−6: Untap up to two target lands you control. They become 5/5 Elemental creatures with flying and haste until end of turn. They're still lands.