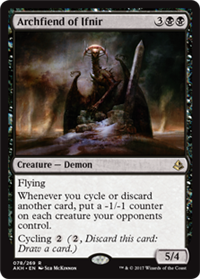 Whenever you cycle or discard another card, put a -1/-1 counter on each creature your opponents control.

4/18/2017 Some cards have an ability that triggers whenever you cycle any card. These triggered abilities resolve before you draw from the cycling ability.
4/18/2017 An ability that triggers whenever you discard a card doesn’t give you permission to discard cards. You’ll need another effect that instructs or allows you to discard them.
4/18/2017 An ability that triggers whenever you “cycle or discard” a card triggers only once if you cycle a card. The ability “Whenever you discard a card” is functionally identical to this ability; cycling is mentioned for clarity.
4/18/2017 If a player discards a card during their cleanup step due to having too many cards in hand, any appropriate abilities that trigger on discarding that card trigger. If this happens, those triggered abilities are put onto the stack and players receive priority in that cleanup step to cast spells or activate abilities (normally, no players may take actions during a cleanup step). Another cleanup step is created following that one.
Posts Quoted:
Reply
Clear All Quotes
Back to Top